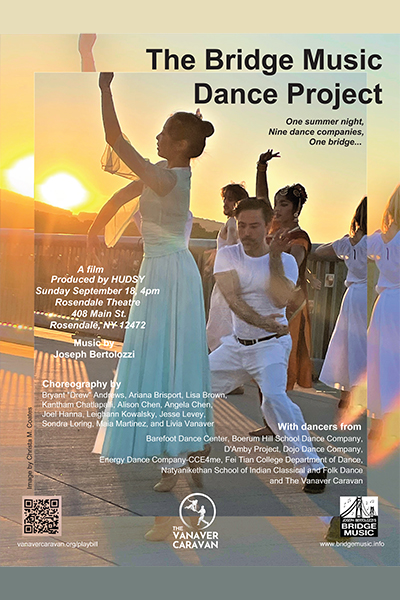 After the program, everyone is invited to meet in community in the theatre. Food and drink will be available in Uncle Tony’s Tavern.

One summer night, 212 feet above the Hudson River, dozens of dancers convened to celebrate the connecting force of bridges to their communities. The Bridge Music Dance Project is a documentation of that performance produced by HUDSY. Karnatic dance juxtaposed alongside hip-hop, Soca, tap, post-modern, ballet, world, Latin fusion, and more. Each dance interprets a movement from Joseph Bertolozzi’s “Bridge Music,” an opus using only sampled sounds from the Mid Hudson Bridge.

His ‘Bridge Music,’ an “audacious plan” (New York Times) to compose music using only sounds sampled from New York’s Mid-Hudson Bridge itself as the instrument has resulted in a sound-art-installation that has operated continuously on the bridge and surrounding parks since 2009. The album “Bridge Music“ (Delos 1045) went to #18 on the Billboard Classical Crossover Music Chart (www.bridgemusic.info). His latest explorations in sound have brought him to ‘Tower Music,’ using the Eiffel Tower in Paris itself as his instrument; that album went to #11 on the iTunes Classical Chart and #16 on the Billboard Classical Crossover Chart (www.towermusic.net).

Livia Vanaver, Founder of The Vanaver Caravan (www.vanavercaravan.org) now celebrating their 50th Anniversary..   In 1973 Livia and her husband/composer, Bill Vanaver, made their home base in the Hudson Valley.  From here, they have toured the US and abroad performing, teaching and collecting dances and music from cultures worldwide. She created a robust Arts Education program celebrating world dance and linking curriculum, serving K-12 schools in the Hudson Valley.  She was part of National Young Audiences,  Lincoln Center Institute,  the Academy for the Love of Learning.   Livia has taught dance at Columbia University in the Graduate Theater Program and Hofstra University. Ms. Vanaver holds a BFA in Dance from NYU School of the Arts (Tisch).