Original building on the site was a blacksmith’s shop to service the town’s cement factories and the Delaware & Hudson Canal.

Stage added to the theatre; burlesque and vaudeville performances begin

Poughkeepsie tile setter, Anthony Cacchio Sr. rents the building and converts it into a movie theatre.  First film screened was the western,  Blood on The Moon.  Tickets were sold for 50 cents apiece for adults and 25 cents for children

Film “purist”, Anthony Cacchio Jr. bans popcorn in the Theatre because it was "too smelly, messy on the seats, and crackling paper bags disrupted quiet scenes”.

2009
The Cacchio family decides to sell the theatre

The Cacchio family decides to sell the theatre. At the time, ticket prices are at $6 with $1 for a bag of popcorn

60 fundraisers and small campaigns including pot lucks, music benefits and an online auction take place to raise money to buy the theatre.

New projector purchased. New Paltz-based Architect Rick Alfandre designed and led the collective through a phase one renovation that includes a new facade of the building and the installation of a ADA compliant wheelchair ramp and lift.

New electric marquee replaces manual marquee that once required the movie title to be updated by changing each letter while standing on a wooden ladder.

The Rosendale Theater forced to pause during the pandemic. The Staff, Board of Directors and Volunteers rally to accomplish many upgrades including a new roof, a renovated lobby and bathroom, new carpeting and fresh paint in the theater. A new dancefloor was also created.

Aug 18, 2021
Reopens for patrons to celebrate the 11th Anniversary 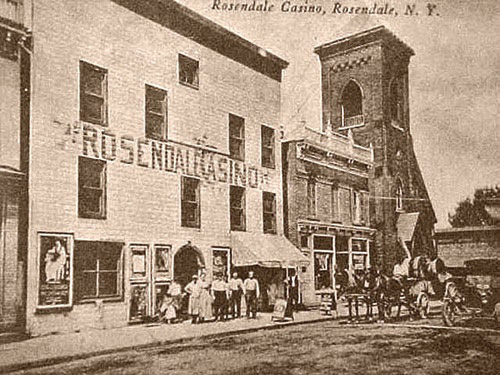 The Rosendale Theatre’s varied history began in 1905, when it opened as the Rosendale Casino.  In the 1930s, a stage was installed for live vaudeville and burlesque acts. The casino was eventually taken over by the local government and was used to house the town’s fire department.

In 1949 Anthony Cacchio Sr, a tile-setter, rented the building and converted it into a movie theater.  The Rosendale Theatre showed about 300 different movies each year, making it unpopular with film distributors. Denied easy access to first-run films, the Theatre turned to independent movies and art films, and eventually began offering live performances.

The entire Cacchio family helped run the Theatre; wife Fannie sold tickets and selected movies, and their sons and grandson ran the projector and eventually managed the day-to-day operation of the business. Until his death in 2020, Anthony Cacchio (aka “Uncle Tony”) continued to run the projectors.

After more than 60 years of continuous operation, the Cacchio family sold the Theatre to The Rosendale Theatre Collective, a grassroots 501c3 established for the sole purpose of purchasing and preserving the Theatre. The group spent months raising funds for a down payment on the building; the bulk of its money came from small individual donations, about 60 fundraisers, a line item grant from Assemblyman Kevin Cahill, and a large grant born from a social media campaign (the Collective won the “Pepsi Refresh Project”).

The Cacchios transferred ownership of the property to the Theatre Collective on August 19, 2010. Since being purchased by the Collective, the Theatre has enjoyed many upgrades, including digital projection and a high end sound system. The façade, lobby, and seating area have all been refurbished.  A wheelchair lift inside the theatre and restroom renovations make the Theatre fully ADA compliant.

The Rosendale Theatre is one of a handful of independently owned venues of its kind. It is a gem, not only in the region, but nationally and internationally.

THE MOVIE HOUSE ON MAIN STREET 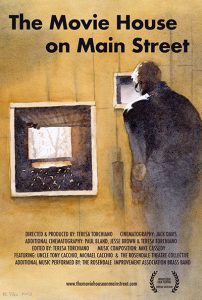 We are offering you Teresa Torchiano’s documentary film about the Rosendale Theatre free of charge, and are happy to accept donations!

Rosendale is a small town in upstate New York with a population of 5,900. In 2009, the town’s single screen movie theatre was slated to close after 60 years in business on Main Street. The family-owned theatre was struggling to make ends meet and faced a required conversion to a new digital projection system that would put the family out of business.

The Movie House on Main Street is a documentary about the story of the Rosendale Theatre and the story of many small screen movie theaters across the United States that have closed due to an inability to sustain financially.