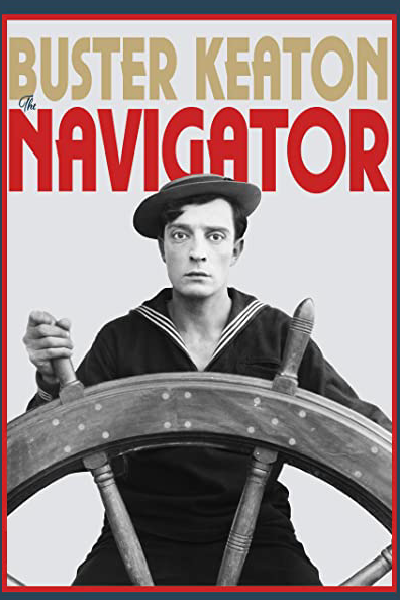 “As surreal a film as it is comedic,The Navigator is still to this day one of Keaton’s most vital, most important and most influential masterworks.”  Joshua Brunsting, CriterionCast

“Its theme of civilized man versus the machine, was never used more effectively in cinema.” Dennis Schwartz

Buster Keaton plays upper class twit Rollo Treadway who has led a life of luxury in which everything he desires is given to him on a silver platter .. literally. So of course when he falls in love with the “girl next door” Betsy O’Brien, he just shows up at her house and expects Betsy to just fall into his arms. Instead, she refuses, full of righteous indignation.

Befuddled and bruised, Rollo decides to mend his broken heart by taking his honeymoon cruise to Hawaii .. alone. Through a series of misadventures, Rollo and Betsy find themselves adrift on the ship, unaware that either is aboard. Once they find each other,they also discover that, for the first time in their lives, they have to do everything, even life’s most simple tasks, for themselves which becomes raw material for Keaton’s favorite kind of mechanical humor.

This plot of rich-person-learning-to-live-in-the-real-world has been used many times before and after, but no one could bring out all the rich  possibilities as Buster. The Navigator was Keaton’s most favorite of his own films and the most popular in his own day. Almost a hundred years later, it is still just as popular and critically acclaimed as his most important and influential film.