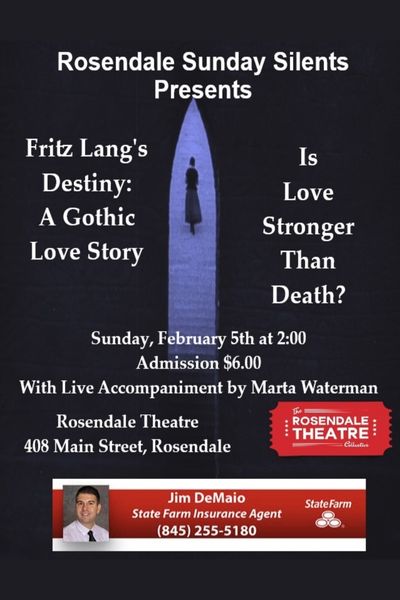 “When I saw Destiny, I suddenly knew that I wanted to make movies. Something about this film spoke to something deep in me; it clarified my life and my vision of the world.” – Luis Buñuel

“A parable about love and death that captivates with its ambition, enigma and sophistication ….It is bizarre and captivating, an eerie dream of longing and fear.”  Peter Bradshaw, The Guardian

If this movie about the grip of the next life has a mantra, it’s this: ‘Love is stronger than death’!” – Danny King,The Village Voice

Fritz Lang directs this Gothic Tale of Love, which asks the question: Is Love Stronger Than Death?

In “Some Time and Some Place,” a loving young couple is riding in a carriage on a country road when they pick up a hitchhiker, offering him a ride into town. Little do they know, this stranger is Death himself, who has recently bought a plot of land that he has turned into a walled garden for his captured souls. Death offers her a deal: he will transport her to alternative realities in which they occupy alternative personae, in love and in peril. If she can save her sweetheart’s life in any of these, Death will spare him. In each story, her attempts to save her lover from his ultimate tragic fate fail. Finally, she realizes the meaning of the tales and takes the only step she can to reunite herself with her lover.

While not well received at the time of its release, ‘Destiny’ would become an influential film,

influencing both Luis Bunuel and Ingmar Bergman in his portrayal of the character of Death in ‘The Seventh Seal”.