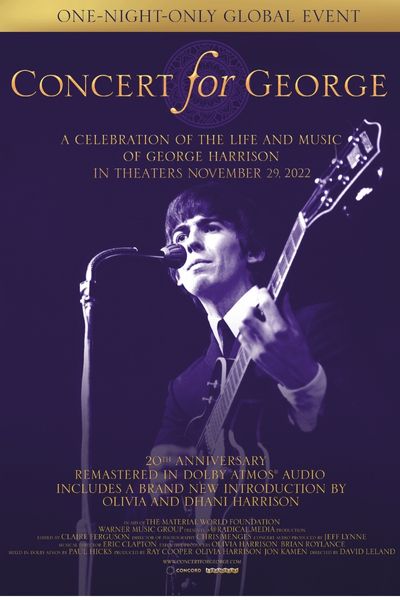 “Concert for George” is a musical tribute to Beatles icon George Harrison. It will have a one-night-only screening at Rosendale Theatre on Tuesday, November 29 at 7:30 PM.

The date of this special worldwide screening marks the twentieth anniversary of Harrison’s passing.

This special film documents the epic memorial concert held originally on November 29, 2002, one year after the passing of George Harrison.

CONCERT FOR GEORGE captures stunning renditions of Harrison’s finest compositions, including “While My Guitar Gently Weeps” (featuring Clapton on guitar, McCartney on piano and Starr on drums), “Taxman” (performed by Tom Petty and the Heartbreakers) and “The Inner Light”(covered by Jeff Lynne and Anoushka Shankar).

“The sweet, solemn music of George Harrison…has rarely sounded more majestic than in the sweeping performances of the enlarged star-studded band that gathered in London at Royal Albert Hall on Nov. 29.” –  The New York Times

Concert For George was directed by David Leland.