From the Blog by Mary Lois Timbes

Nostalgia As a Way of Life 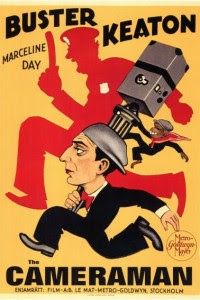 The funky little theater smelled of popcorn. Gray heads gathered in the center, parents were filing in with little kids, little girls came in pairs and scattered themselves about the house. A musician prepared the keyboard. We are in Rosendale, an artistic little burg seven miles from home, ready to view the Buster Keaton silent The Cameraman. I’ve seen a lot of Buster Keaton, going back to the Keaton Festival at the Elgin in New York City in the early 1970s. I am a very big fan.

I find a seat and am at once transported back in time, to a different movie house, the Fairhope, in the 1950’s. I am one of the little girls excited about going to a movie with a friend. We are chattering like those two I see, I am already hooked on the movies, and it’s only going to get worse. I will come to picture myself playing roles on the screen, imagine how I would read certain lines, tilt my head like that leading lady, swoon in the arms of that big strong actor, play that death scene so elegantly with one eye at a time streaming a tear.

I will grow up to major in drama in college, to take leading roles, to enroll in acting classes in New York, to start my own theatre companies in Geneva and in the U.S. I eat this stuff up and it in turn eats me up too.

But now I’m past all that. I’m retired from it all, sitting in an old-fashioned movie house fairly reeking with popcorn which my gastroenterologist has warned me not to eat. I am surrounded by the innocents on all sides and submerged in my own childhood innocence. I am swept into 1928, with Buster Keaton trying to win the heart of a pretty girl and operate a movie camera with a monkey at his side at the same time. As always in a Keaton film, the audience loves it. They are laughing loudly and the little boy next to me is saying, “Go, monkey!” and bouncing in his seat.

Before the movie starts there is the commercial break. Local businesses advertise on slides, and the Rosendale Theatre Collective makes a bid for money to refurbish. They want to raise $300,000, which doesn’t seem to me enough, but I look around Rosendale and wonder how the hell they are going to get that much. I can donate–how much should I give? Should I get involved in helping them raise funds? How could I resist? What can I do?

They seem such an earnest lot, and the cause is definitely my kind of thing. This little town deserves a first rate movie house, and it is doing all it can to create one. You too can partake.

Go to their website and see if you don’t wish you lived here. See if you’re not moved to open your wallet. And if you’re ever in the area, you will want to come to a movie. You may even be allowed to eat the popcorn.

To visit the blog by Mary Lois CLICK HERE