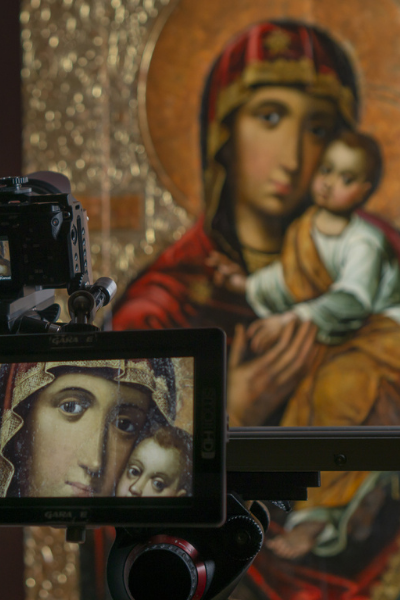 $25 Proceeds will be donated to the filmmaker’s charity of choice Cash for Refugees | Documentary | Ukrainian with English Subtitles | Doors open at 6:15 pm | Film begins at 7 pm | Q&A begins at 8:30 pm

The Woodstock Film Festival returns to the Rosendale Theatre on May 5th, 2022 for a special fundraiser and screening of the 2021 documentary NATIONAL MUSEUM, directed by award-winning Ukrainian filmmaker Andrei Zagdansky.

NATIONAL MUSEUM: National Museum was released in August of 2021. A “direct cinema” documentary, NATIONAL MUSEUM, explores the art and inner workings of the major art institution in Kiev, Ukraine.

Restoration specialists, curators, art handlers, designers and, of course, visitors are fascinating characters in this unhurried, poignant and occasionally funny survey of what is cherished and revered by the nation of forty five million.

Curating, mounting and opening of two special exhibitions – one dedicated to the Ukrainian baroque and another one to a prominent avant-garde artist, Alexander Bogomazov –are the defining events in the narrative structure of the film.

Preceding the film will be an animated short by the evening’s Q&A moderator, renowned Latvian filmmaker and animator Signe Baumane.

About the Filmmaker: Andrei Zagdansky is an Award-winning documentary filmmaker, member of the European Film Academy, Andrei Zagdansky was born on March 9, 1956 in Kyiv, Ukraine, back then a part of the Soviet Union. He received an MFA with distinction from Kyiv State University of Theatrical Arts.

About the Moderator: Signe Baumane was born in Latvia, educated in Moscow, and lives in Brooklyn NY. She is a director and has made 16 animated shorts and 2 feature films. Her 1991 short, THE WITCH & THE COW was made in Latvia, and is about a small witch trying to milk a huge cow with unexpected consequences.