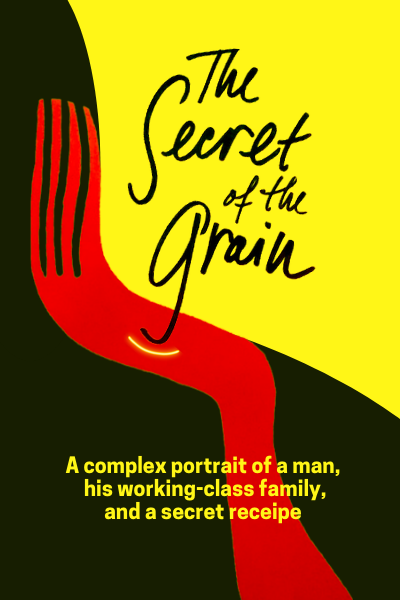 The Secret of the Grain

About the Tasting:
Authentic Tunisian savory and sweet couscous tasting with flatbread comes packaged in an eco-friendly, lap-friendly, disposable 8 oz container with utensils. Delicious and generous tasting courtesy of chef Yuval Sterer from The (fabulous) Big Cheese. *Available by pre-order only – must place reservation by 4/27.

About the Film:
Set in a small port town in the south of France, The Secret of the Grain unfolds slowly, much like a documentary whose goal is to expose a universal wrong. Conversations about agism, heritage and one’s identity are artistically framed with subtle visual metaphors throughout the film.

The story centers on a washed-up shipyard laborer from the Maghreb, his family, and the immigrant diaspora supporting the local port economy. After 35 years of dedicated service, new management claims our aging protagonist has become unprofitable. “I’ve done nothing, left nothing” he declares to his divided family. Yet, the chance to leave a meaningful legacy comes by way of a young friend, a dilapidated boat, and his ex-wife’s couscous.

Couscous, a staple food in MENA culture, is also widely consumed in France. Like anyone in pursuit of a dream, one must be willing to risk it all.

“…Made of life itself.”  -Roger Ebert