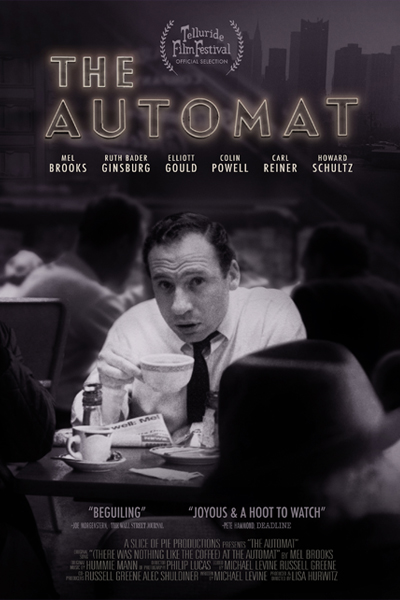 Once upon a nickel, before fast food, one American restaurant empire was unstoppable. Experience the untold story of “The Automat,” a documentary film directed by Lisa Hurwitz and starring Mel Brooks.

“The Automat” recounts the lost history of the iconic restaurant chain Horn & Hardart, which served affordable-priced quality food to millions of New Yorkers and Philadelphians for more than a century. Found by Joseph Horn and Frank Hardart in 1888, it revolutionized the nation’s restaurant scene with comfortable interiors, quality food, and state of the art technology for the early 20th century. The chain welcomed those who had been ignored, including immigrants, the working-class, Blacks, and women, all of whom were often not welcome in restaurants. Horn & Hardart’s technology captured the public’s imagination like nothing else in 1900’s— the customer put nickels into slots and little windows opened to reveal the customer’s pick, be it a slice of pie, macaroni and cheese, or a Salisbury steak. The gleaming glass and stainless-steel windows looked “sanitary” and like nothing else in existence. “The Automat” illustrates how the company both served the public with great food and at the same time treated its employees with fairness and integrity.

The documentary’s theme song written in the Great American Songbook genre “(There Was Nothing Like The Coffee) At the Automat” was composed by comedian and writer Mel Brooks, who speaks with great affection about his days eating at the Automat. Brooks’ composer Hummie Mann is credited with writing the rest of the film’s score, which was done in the Gentleman’s Swing genre, and performed by a 26-piece orchestra.

Mel Brooks is one of several prominent Americans paying homage in the film to the memory of a restaurant chain that once dotted the corners of two great cities. The late Supreme Court Justice Ruth Bader Ginsburg, Secretary of State Colin Powell, actors Carl Reiner and Elliott Gould, the Horn family and the Hardart family, and dedicated former employees share memories of life at the Automat. Starbucks Coffee founder Howard Schultz talks about how he was inspired to start his company because of Horn and Hardart.

The Automats were also known for their outstanding décor with grand entrances and luxurious interior spaces embellished in Carrara marble and brass fixtures. Joseph Horn and Frank Hardart felt that inexpensive food should still be served in an elegant setting. Coffee dispensers featured dolphin head spouts out of which coffee cascaded, tables were marble, and windows framed in brass. A cashier mounted in the center made change so you could put your nickels and dimes into the slots of the little door windows to get your slice of pie, macaroni and cheese or a salisbury steak, which magically appeared from behind the other side of the wall.

Horn and Hardart was a favorite location for dozens of movies and televisions shows. Jean Arthur bantered with Ray Milland in front of the three-nickel pie slot, and Cary Grant spotted Doris Day entering the store.

Director Lisa Hurwitz spent eight years interviewing dozens of celebrities and former employees and visiting far-flung places where collectors hoard the surviving remnants of the once spectacular Automat restaurants. The audience will enjoy an endearing first time look into one of the most successful business ventures of its time through the eyes of those touched by their experiences.

“”Said the Technocrat, to the Plutocrat, To the Autocrat, and the Democrat, Let’s all go eat at the Automat.”
― New York Evening Sun, 1933

“Joyous and a hoot to Watch”
― Pete Hammond, Deadline