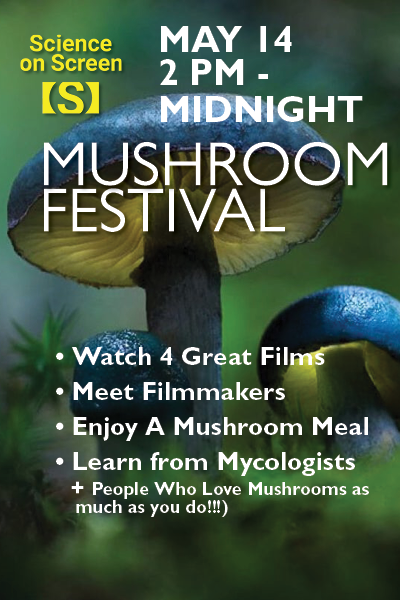 Deep in the forests of Piedmont, Italy, a handful of men, seventy or eighty years old, hunt for the rare and expensive white Alba truffle-which to date has resisted all of modern science’s efforts at cultivation.

Created by our culinary neighbors at The Big Cheese, our festival mushroom meal features an amuse bouche of wild mushroom bisque; an entree of polenta topped with an assortment of wild mushrooms; organic greens and a cookie. All meal orders must be placed by Saturday, May 14th, available while supplies last.

Lucien and Regina gather wild mushrooms in the woodlands of New Jersey and sell them to restaurants in New York. Their lifestyle is simple, their income unstable. Regina decides to take a full-time job cooking at a high-end restaurant to improve their financial security and to follow a more fulfilling personal career path. Feeling threatened, Lucien proposes that instead of selling out, they give up their apartment and drive to the more-profitable West Coast as full-time itinerant foragers. As individual desires take them down divergent paths over the course of a year, their marriage is put to a test.

Jason Cortlund and Julia Halperin will introduce the film and are offering a post-film discussion with Q&A. The Rosendale Theatre Filmmakers Series is sponsoring this event.

8:30 PM Attack of the Mushroom People

A group of pleasure-seeking young people are stranded on a mysterious island when their boat crashes. One by one they succumb to the lure of the deadly mushrooms.

Fantastic Fungi is a descriptive time-lapse journey about the magical, mysterious and medicinal world of fungi and their power to heal, sustain and contribute to the regeneration of life on Earth that began 3.5 billion years ago.

Fantastic Fungi first screened at the Rosendale Theatre in 2019 to repeated, sold-out houses. We are thrilled to bring this film back to our screen as part of our mushroom film festival!

Science on Screen® is an initiative of the Coolidge Corner Theatre, with major support from the Alfred P. Sloan Foundation.

The Filmmakers Series is presented with support from the J.M. McDonald Foundation

Mushroom coffee served in the Rosendale Theatre lobby thanks to FourSigmatic.