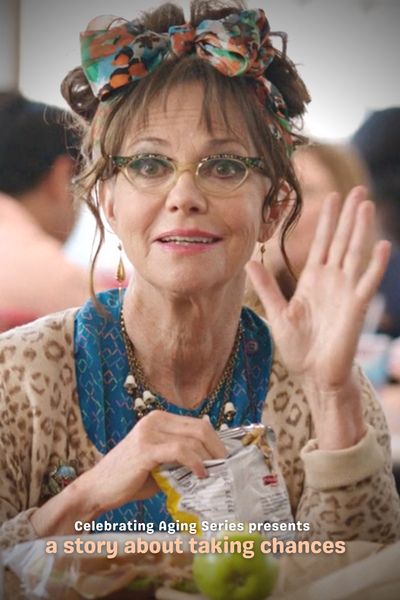 After a lifetime of being overlooked and ignored, an eccentric 60-something woman finds the courage to start anew. Having forfeited her own life to care for an ailing mother, she finds herself alone without purpose or direction. Having nothing to lose, Doris enrolls in a self-help seminar which leads her into life-changing experiences and rewarding personal growth.

For a society infatuated with youth and technology, this film portrays the complicated and often messy realities of aging alone, romance and loneliness. While many articles, books and series talk about life after 60, there’s nothing like watching the great Sally Field tackle ageism in this wonderful dramedy.

Although ageism is endemic, former surgeon general Vivek Murthy believes America’s epidemic of loneliness has generated a public health crisis equal to the opioid epidemic and obesity. In a NYT article, John Leland wrote: “Being lonely, like other forms of stress, increases the risk of emotional disorders like depression, anxiety and substance abuse. Less obviously, it also puts people at greater risk of physical ailments like heart disease, cancer, stroke, hypertension, dementia, and premature death. In lab experiments, lonely people who were exposed to a cold virus were more likely to develop symptoms than people who were not lonely. An often-cited meta-analysis by Julianne Holt-Lunstad of Brigham Young University compared the risk effects of loneliness, isolation and weak social networks to smoking 15 cigarettes a day.”

Now in its 5th season, Celebrating Aging Series at the historic Rosendale Theatre explores relevant cultural narratives through the creative lens. Programs include conversations with experts from the arts, culture, academia, and the sciences.

Caren Martineau, series producer and Rosendale Theatre BOD Member, is the founder of Bevival.com, the first of its kind death literacy content platform. Martineau’s goal is to “inspire and help others affect a positive change in their own lives, long before the end.”

“Ms. Field makes a movingly real performance that reveals its truth incrementally… uses a funny, outwardly ridiculous character to tell a simple story about a love…that of an older woman for a much younger man.” – New York Times

“A sharp dramedy focusing on the romantic stirrings of a lonely office worker, played with considerable wit and verve by the 69-year-old Sally Field.”