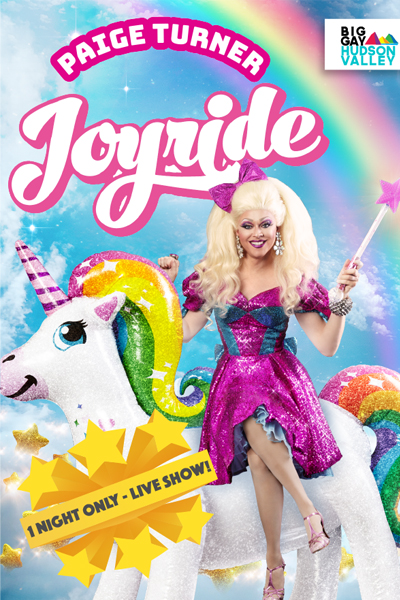 Get Ready for the ride of your life! NYC drag darling “Showbiz Spitfire” Paige Turner is ready to take you on a much-needed “Joyride”after the tumultuous year we’ve all been through!
Begin a journey to the new normal in this ridiculous all LIVE sung evening of mayhem and foolishness! Featuring signature song parodies and music from the 60s, 70s, 80s, 90s plus a bit of Disney + Broadway. You name it! Prizes and joy guaranteed!
This show contains adult language and themes. All attendees must be 18+.

==============
ABOUT PAIGE TURNER
Known as the ultimate Barbie of the Drag World, “Showbiz Spitfire” PAIGE TURNER currently serves as Brand Ambassador for the Pilgrim House in Provincetown, MA where she performed her show “JOYRIDE” for the full 2021 season.
This 2-time Glam Award winner tours throughout the country in her All -Live one woman shows and is a headliner for Atlantis and Aquafest Cruises. She coined the phrase Slurp!, which is also the name of the longest running drag show in NYC! Paige was an original cast member of the reality show Shade: QUEENS OF NYC, on the Fusion Network and has been seen numerous times on WATCH WHAT HAPPENS LIVE! With Andy Cohen On Bravo. She produced, hosted and created NYC’s live drag reality show “So You Think You Can Drag?” launching the career of over 100 Drag Queens and holds the record of NYC’s longest running drag show “Slurp!” which played for 10 years at Therapy Bar in NYC.